Team CEHA is made of players that are regulars at Canadian Elite Hockey Academy
camps.
We have been selected as the team that will represent Germany and thus will be known
as team Germany. European countries are represented by one team per country,
thus it was a great honor to be chosen as team German.
The Quebec international peewee tournament has been running since 1960 with thousands
of future professional players having competed.
Names such as: Guy Lafleur, Wayne Gretzky, Ray Bourque,Mario Lemieux, Patrick Roy, Steven Stamkos ,
Connor McDavid are a few of the many famous alumni of this prestigious tournament.
It is unofficially the world peewee hockey championships, with up to 20,000 fans watching single games.
Team

Team CEHA was the youngest team in the tournament with 3-2007, and 2-2006 born players.
The team plays a high tempo, skilled style of hockey, with an emphasis on  creativity and individual skill, played within
a team concept.
CEHA plans to annualy  send a team to represent Germany. Next season, 2019 will feature 2006-2007
born players.
Team CEHA-Germany finished with the following results at the 59th edition: 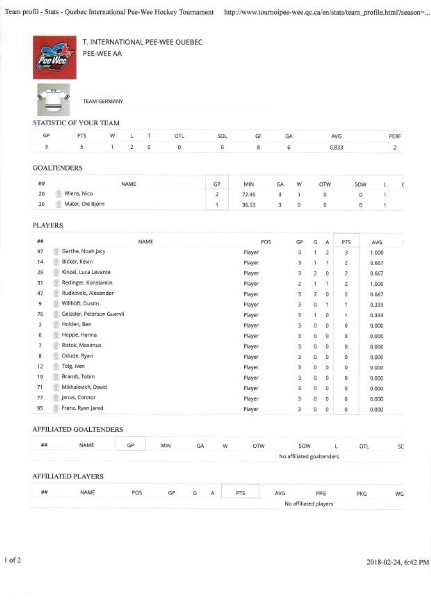